The previous articles on how to deal with tornadoes and lightning weather have been mentioned. But there are also few players can’t find this special weather, even after 20 or more competitions. Actually, you need to get the spider-man mythic ability on the map. And go up to the northwest, observe the clouds on the top of mountain. Basically you will find it but you must run fast because it only lasts for 7 minutes!~

Today we will take a look at the conjecture about the cube queen. In the final of Chapter 2, we can see she got hit into water, but it doesn’t mean she’s dead or gone forever. Also countless spaceships, the huge mother ship like a whole planet with a golden cube in the middle. The crazier thing is the broken planet can also be seen in another shot of fortnite chapter 3 as well meaning that the cube queen the last reality and all that evilness is not gone forever . We've just managed to separate ourselves from them for now. 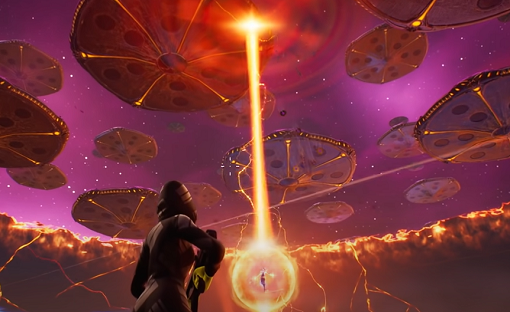 Officials have not explained the origin of the Queen Cube claiming that she has disappeared, so the possibility of reappearance cannot be ruled out.

Is the news good or bad for you?

By the way, if anybody still don’t know where to find free llama, here is the answer. You'll always find one of the Fortnite llamas at the Llama Homestead landmark, which is southwest of Logjam Lumberyard on the opposite side of the lake and along a short section of river. In this stable you'll not only meet Lt. John Llama, one of the Fortnite characters you can hire to fight alongside you, but a Supply Llama will also spawn within the paddock.