Time flies, we ushered in C3S3, the tournament is still in progress; but friends who don't care about the game must be more concerned about the new content of C3S3; first of all, the long-awaited return of the pink battle robot. In the live event the robot is going to continue to be constructed allowing us the players to literally follow this event's literally in the build-up to the brand's new season, this is pretty cool, thanks for Epic bring it back and achieve our dream.

And there's only one drill that is currently in our fortnight's game that is worth talking about that  is the giants drill. Dr Sloane's giant drill would seem like at some point during this event, this giant drill is going to burst and we assume that means explode. Small missile destroyed this just seems to be a gameplay queue suggesting that some kind of small missile will be destroyed there's obviously going to be some crazy conflict battles going on during this fortnight event. Tank, bullets, impact and tank bursts, good timing speaking of tanks.

Also, someone inferred that weapon swap seems to be one of the last coatings that is going down in this season's final event and it's suggesting that somebody is going to be swapping a weapon; this is speculation for sure but maybe is weapon swap is suggesting the giants robot is going to be swapping out a temporary r for the actual arm that's in our Fortnite ocean right now leaked documents. 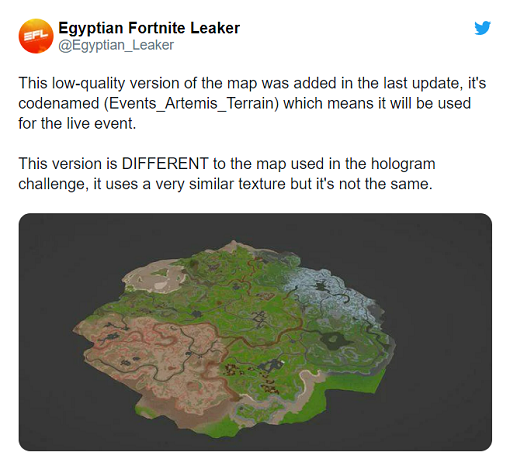 And last, this following image was shown by Egyptian Leaker on Twitter, who has revealed many major Fortnite leaks previously. Artemis is the name of the current map and it has already been confirmed that there will be a significant live event this season. This texture will supposedly be used in the event and may likely be the aftermath.