Fortnite 19.3 Update You Need to Know

Fortnite update 19.30 was released on Tuesday 15th February. Rather than adding new locations, weapons or items to the game, this update focuses on the gameplay experience itself, making it faster to get to the lobby and checking out the control options available to Fortnite players. Include that :

Players who boot up Fortnite after the 19.30 patch will notice that they are no longer taken to the screen where you choose between Save the World, Battle Royale, and Creative modes.

1. About weapons, as can be seen from Ali-A's video from Youtube, the Scar - plenty of players’ favourite weapon is back! Even it is considered one of the most powerful weapons ever to be in Fortnite. Besides , the popular ledendary rocket laucher also appears in the video. But it’s not the most exciting thing. The craziest thing is the player who gets a rocket ride into the huge tornado with the spider-man gloves! Unbelievable action! In addition, the return of the Heavy Shotgun has also brought a fresh, unique take on a classic weapon in Fortnite. 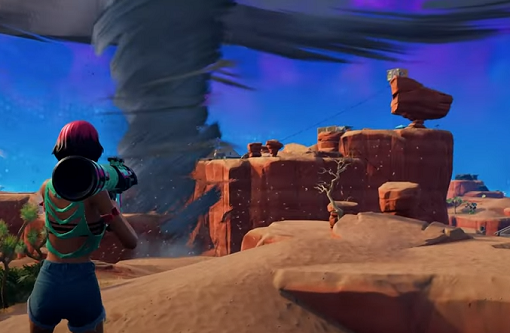 2. How to find Drake’s Treausre

In-game, what you need to do is bring up the treasure map when it's in your inventory and then keep an eye out for a dotted line that'll show on the ground.

What that is doing is showing you the direction to the treasure. You'll need to keep using the treasure map to bring up the dotted line and ensure you don't get lost.

Once you've spotted a golden glowing section of the ground, you should have found the treaure. There will also be an X on the spot that was glowing.

Then, all you need to do is use your pickaxe on the X until the treasure appears above ground; grab Drake's loot and continue on your quest for the Victory Royale.