Fortnite chapter 3 season 1 has brought us a lot of exciting content. Now that season 1 is coming to an end, everyone is looking forward to what new content will be in season 2. How will the map change? What new skins and stories will there be?

Let’s talk about the details.

1. When will Fortnite Chapter 3 Season 2 begin?

Refer to the change time of the previous season; Season 2 of Fortnite Chapter 3 is likely to start on Sunday, March 19, 2022. Season 1 starts on Sunday, so it seems sensible to expect the start date of Fortnite Season 2 to also fall on that day of the week.

2. What is New Sprint Mechanic and where will have earthquake cracks?

According to HYPEX, in Fortnite Season 2, we'll get another in-game mobility and movement feature, the tactical dash mechanic, which we also know from games like CoD: Warzone. When this mechanism is activated, it increases the running speed. When going downhill, it will slowly increase further. Also, the camera should shake during use, similar to a swipe. The more you increase the speed when going downhill, the more the camera will eventually shake as well. This may be to make it difficult to aim while running. He also revealed about earthquake cracks: “Here's where the earthquake cracks will appear (the red lines), it's most likely multiple drillers or one going through the map looking for something, they enter Tilted for a short time but then they stop next to The Devoured landmark, and they also pop out of those 3 X's”. 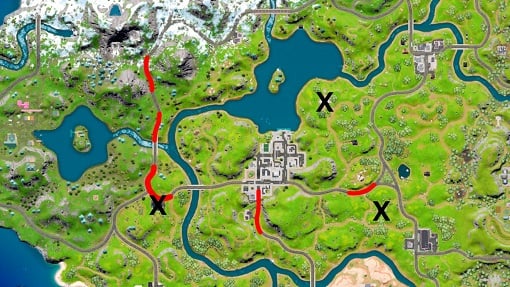 3. What series of skins will be new?

It said that Paramount has signed a deal with Epic Games. The perfect template to launch crossovers with, for example, Avatar, SpongeBob, the Ninja Turtles, and so on. Logically, none of this has been officially confirmed yet, but the possibilities seem endless!

And that's it for now with the leaks. Let's hope for some both new and old weapons as well.